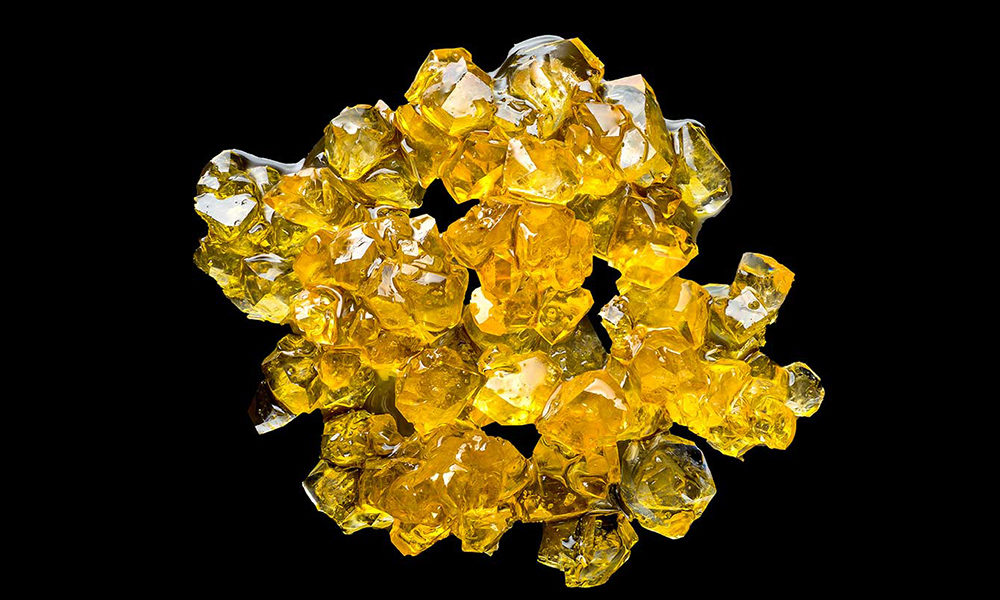 For many enthusiasts, concentrates are among the most enjoyable and versatile of cannabis products. While a little concentrate goes a long way, these extracts are easily vaporized, smoked, or used to make infused topicals, edibles, and more. Not all concentrates, however, are created equal. The way that different cannabis concentrates are prepared has an impact on the end result.

In order to delve deeper into the past, present and future of cannabis concentrates this 710, we have called in the expertise of the team from Oleum Extracts. The Washington-based, multi-award-winning processor company is considered to be one of the best in the industry, developing consistently innovative products — like their THCA crystalline Wizard Stones — and producing high-quality extracts.

Here’s what every aficionado needs to know about cannabis concentrates.

The Evolution of Cannabis Concentrates

Oleum Extracts believe that the evolution of cannabis concentrates has seen a shift away from the wants and needs of producers towards those of the consumers.

“As consumers become more educated, they are asking better and more meaningful questions regarding the products they are ingesting/consuming, which is a good thing,” said Team Oleum. “New topics such as cannabinoid profiles, terpene profiles, how the products made, what kind of materials are used, and knowledge of the manufacturers are making their way into the purchasing decisions of consumers.”

They also think that as consumers become savvier to which companies and products have the most stringent production policies and consistent products, “brand trust and loyalty are beginning to make their presence felt.”

When purchasing cannabis concentrates, asking for the cheapest products with the highest THC levels should not be at the forefront of consumers minds and Team Oleum believes “we’re starting to see this shift happen away from that type of thinking.”

“We are anxious to see what comes out of the isolation of these other cannabinoids, as these compounds are often only found in trace amounts in flower form (less than 1%). Now that we are able to isolate them, we will be able to see the implications of larger doses and combinations of these cannabinoids and/or cannabis-derived terpenes on the human vessel.”

The majority of cannabis concentrates require a solvent to extract. A solvent is a substance, usually a liquid or a gas, that separates trichome resin glands from unwanted plant material. The separated essential oil is then collected and further processed to create the high-potency oils and products that are so popular today.

Many different solvents can be used to make cannabis concentrates. Of these, however, there are three solvents that dominate the market: butane, carbon dioxide, and ethanol. Each of these solvents is used to effectively remove cannabis resin from the plant and concentrate the resin into the sap-like oil aficionado’s everywhere have come to know and love.

Carbon dioxide (CO2) is most commonly used to make syrupy extracts for vapor pens. The solvent, however, can also be used to make other forms of concentrates. Oils extracted with carbon dioxide can be dabbed, used to fill capsules, or used as oils put underneath the tongue. Unlike butane, however, carbon dioxide tends to remove much of the terpene aroma molecules found in cannabis flower. As such, CO2 oil can feature a strikingly different chemical composition than the cannabis plant from which it came.

How To Spot Quality Concentrates 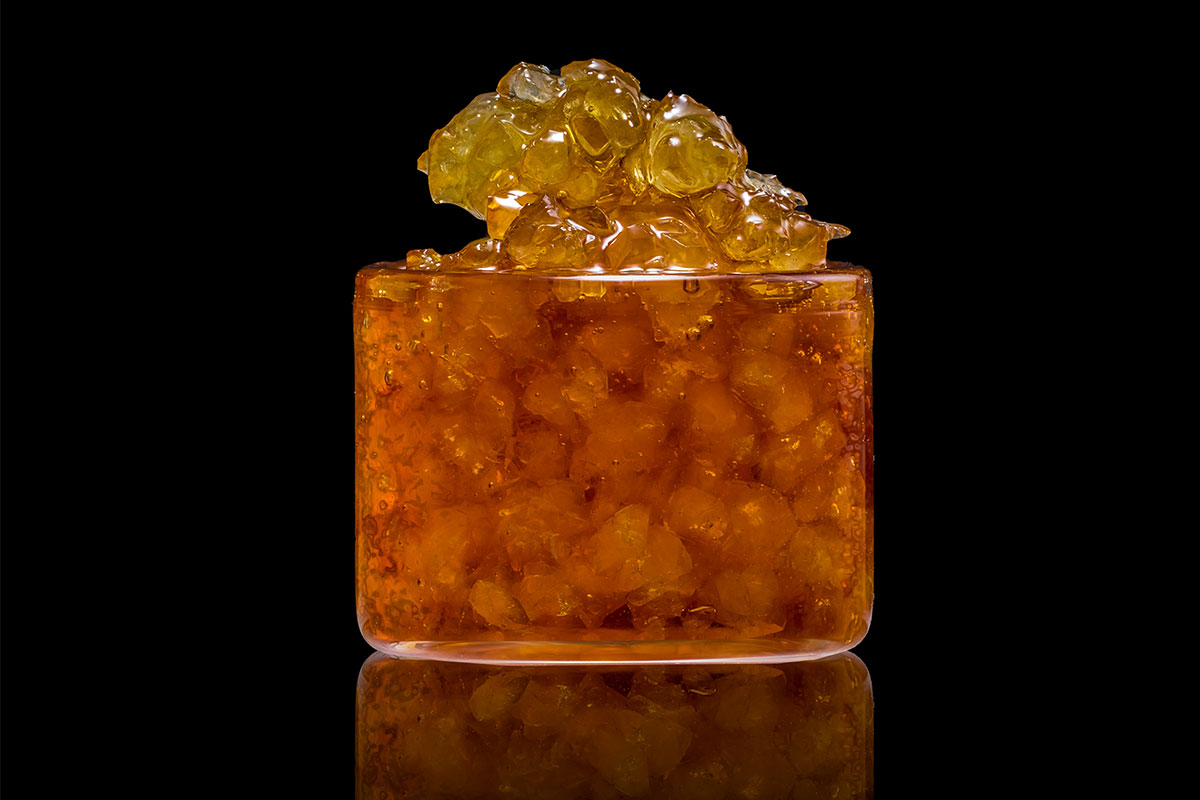 Searching for truly high-quality material? There are three basic factors to keep in mind: color, consistency, and lab reports. A hallmark sign of quality in almost all cannabis concentrates is a golden-amber coloration. Most solvent-based concentrates should appear amber, although the color can range a light gold to warm rust.

Some concentrates, like FECO and RSO, may look almost black. The deep coloration in these products indicates that greater amounts of chlorophyll were extracted along with other cannabis compounds. While more chlorophyll may provide a bitter, herbal taste, the inclusion of a greater variety of plant chemicals may make these types of concentrates more appealing to medical consumers.

The introduction of alternative methods and new equipment has resulted in an improvement in cannabis concentrates — good news for the aforementioned medical patients and dabbing enthusiasts alike.

Concentrates should feature a fairly consistent constitution. No one, for example, wants to find hard chunks in their budder, nor do they want to find leaf matter or stem fragments in their hash. If a concentrate doesn’t take on the form that is advertised, chances are it is a low-quality product.

“In the beginning, good concentrates were known pretty much by aesthetics and the way they looked,” said Team Oleum. “Followed up with a sniff, the color and smell of the product were the easiest ways to spot a good concentrate back in the day. Now, a concentrate can look great, and even smell ok, but once dabbed or vaped might taste horrendous.”

Third-party lab reports are essential, proving the manufacturer and consumer with information on the chemical constituents in the concentrate, like the terpene profiles of the flower.

“While a concentrate may look attractive, low-quality flower with low terpene content may have been used during the extraction,” said Team Oleum. “Most lab reports list information on the potency and dominant cannabinoids in the product. Some reports, however, will also list the primary terpenes in the concentrate as well. In general, the more terpenes preserved in the concentrate, the greater the flavor and aroma.”

“The only individuals really doing any quality control of the products before going out to market are the producers and processors themselves. If these individuals are not cannabis consumers,  and/or are not trying their own products it is doing a great disservice to both their brand and their consumers.

“If the owners and operators of these brands do a good enough job at this, the reward is consumer trust in both the brand and its products. When people can trust where the material is being sourced, how it is being processed and the care that goes into its production from start to finish. These are the brands that are earning the most market share and seeing the most positive feedback from consumers.”

Walk into any cannabis shop these days and you’re sure to find a plethora of containers filled with sticky goo. The market for cannabis concentrates is growing faster than ever, with data suggesting that concentrate sales may surpass sales for dry flower within the next four years. Here are some of the most popular cannabis concentrate products. 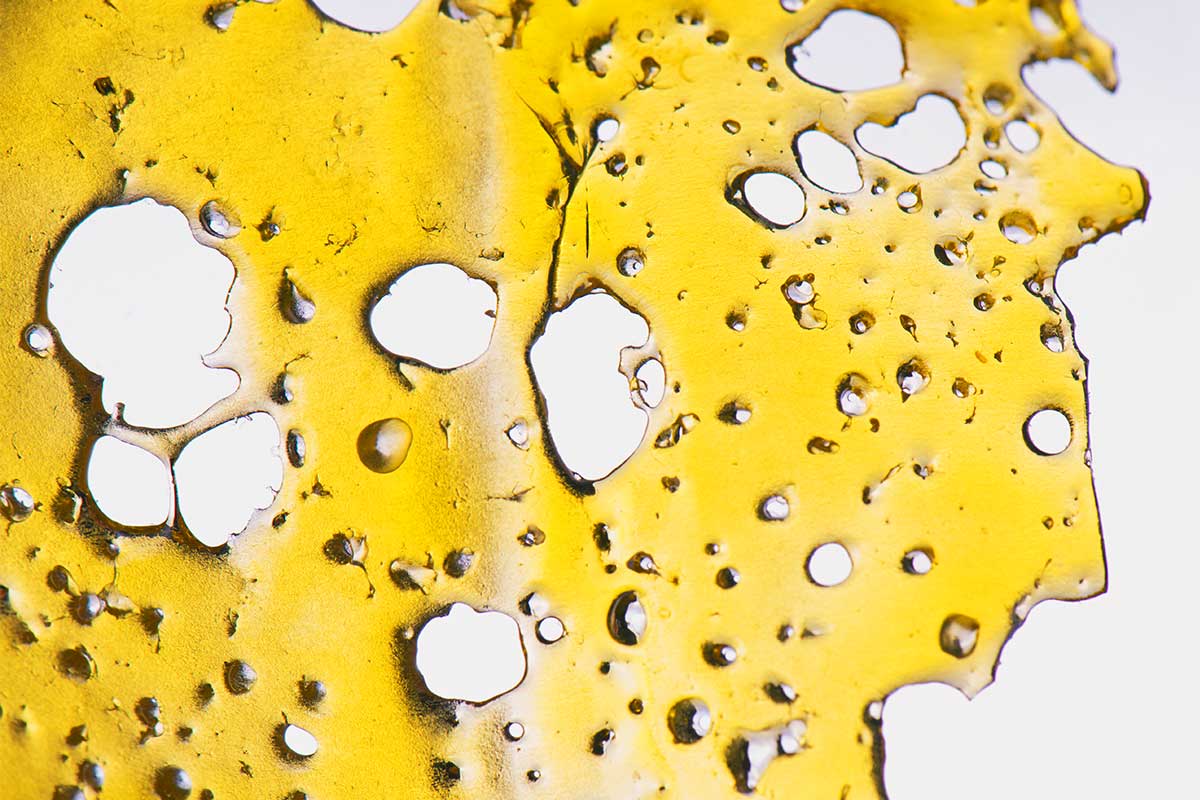 Shatter is easy to spot in a dispensary but relatively difficult to make for extractors. Shatter is a cannabis concentrate that takes on the consistency of an amber-colored glass shard. These shards can be broken up and dabbed, although the oil’s crystalline constitution makes it slightly more difficult to work with than other concentrate preparations. 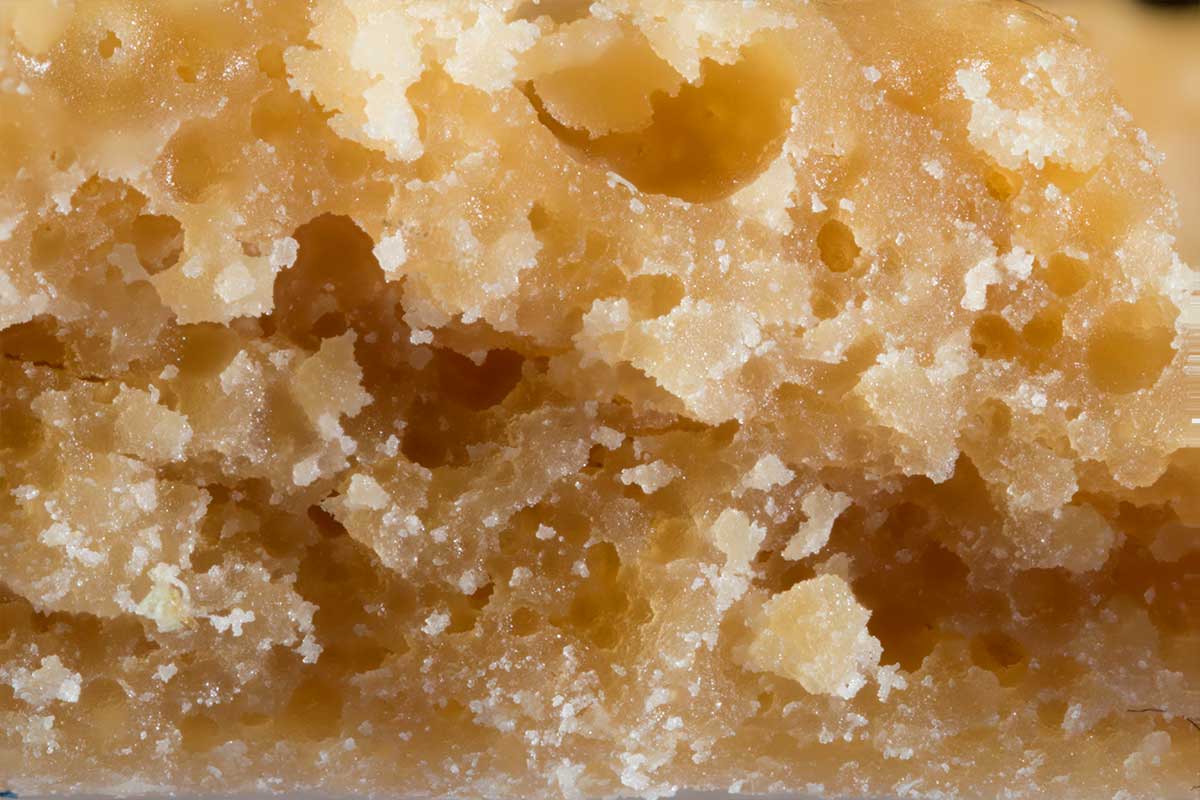 Wax and shatter are made in essentially the same way, although wax tends to be physically agitated more during processing. As a result, the preparation loses its glass-like consistency and instead develops a waxy, honeycomb-like constitution. Some individual strains may also be more inclined to “wax up” than other strains. In general, waxes tend to be softer and easier to manipulate than shatters. 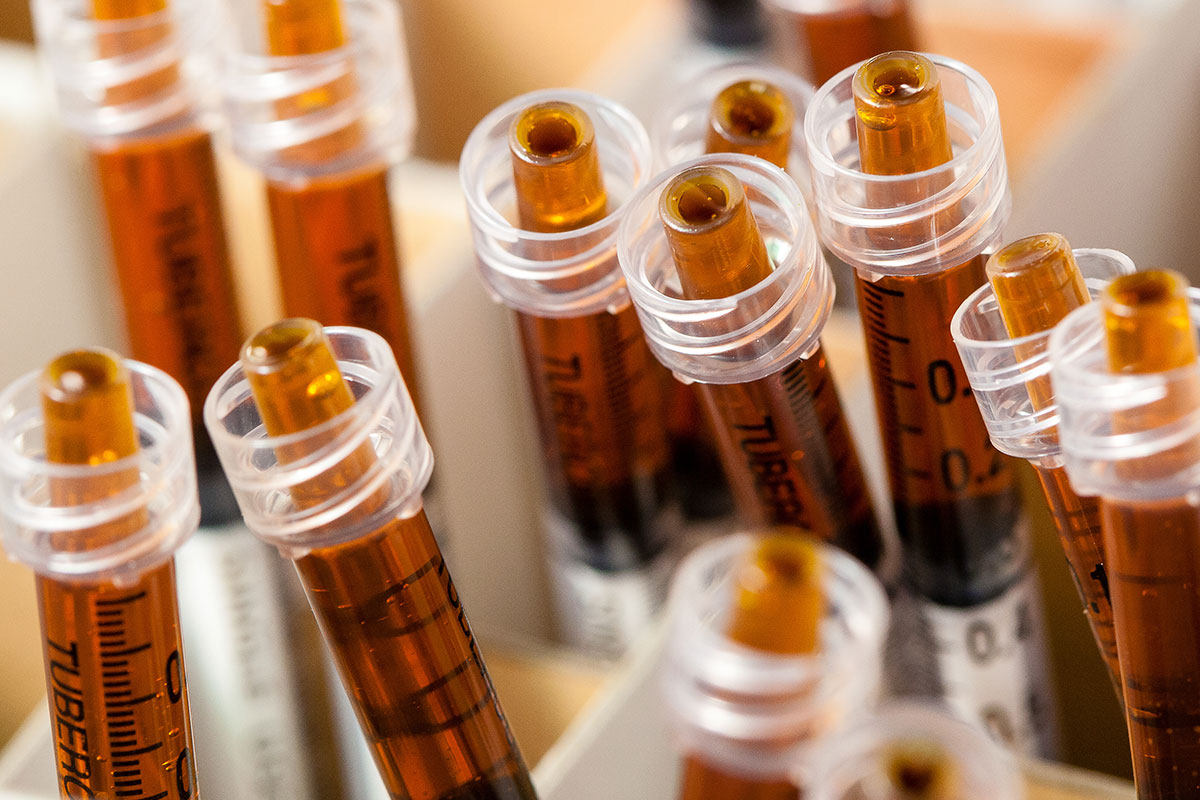 Cannabis oils are concentrates that maintain a consistent liquid state. Oils are most often made with ethanol, which preserves the widest array of phytochemicals found in any cannabis extraction. Oils of this type are often referred to as full-spectrum cannabis oil (FECO) or Rick Simpson Oil (RSO). These oils are often used under the tongue or are ingested orally. Carbon dioxide, however, can also be used to make a syrupy oil, such as that found in vapor cartridges. 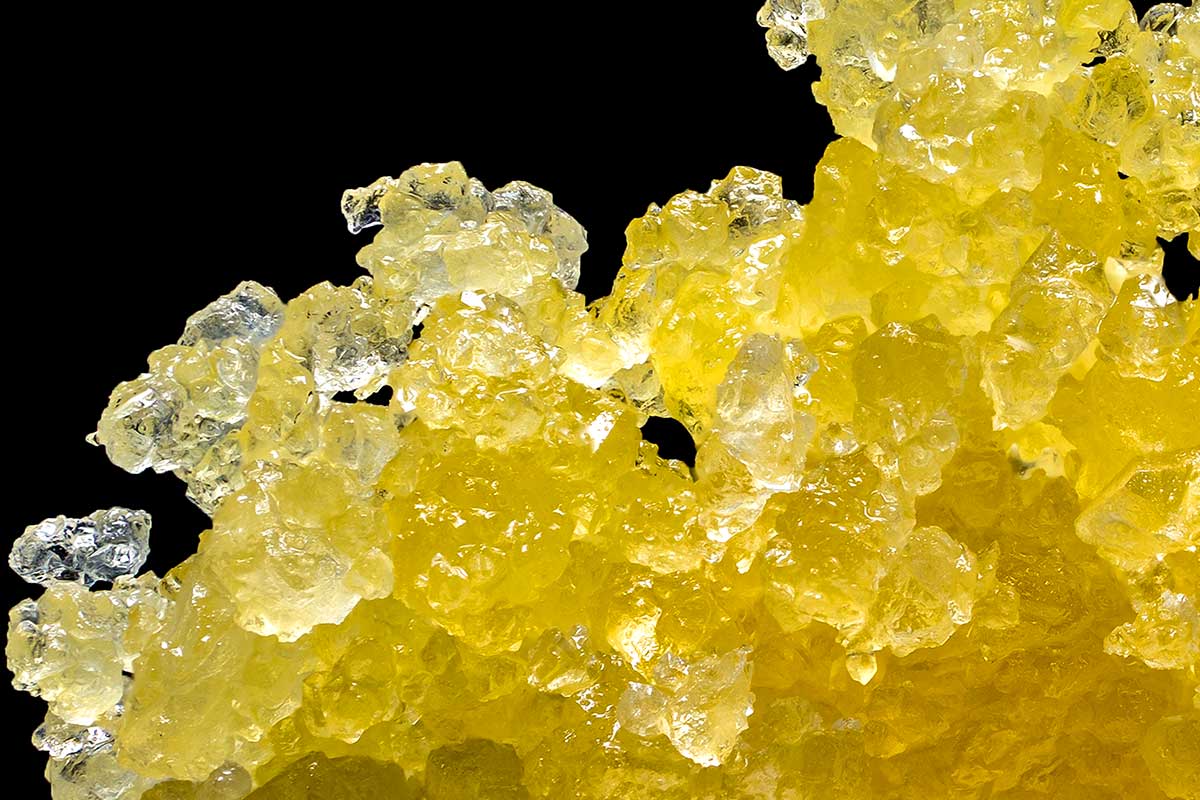 Live resin is a king among concentrates. Unlike all other concentrates, live resin is made using fresh cannabis flowers that have been flash-frozen in order to preserve terpene quality. These fresh flowers are then processed using butane as a solvent, creating a wet and semi-solid concentrate that features superior flavor, aroma, and overall terpene quality.

Using a solvent is the easiest way to extract cannabis concentrates. Solvents, however, are not required to make a concentrated cannabis product. Products like hash and rosin do not require solvents at all, which makes them preferable to many consumers. Although, solventless concentrates tend to be less potent than their solvent-based counterparts. 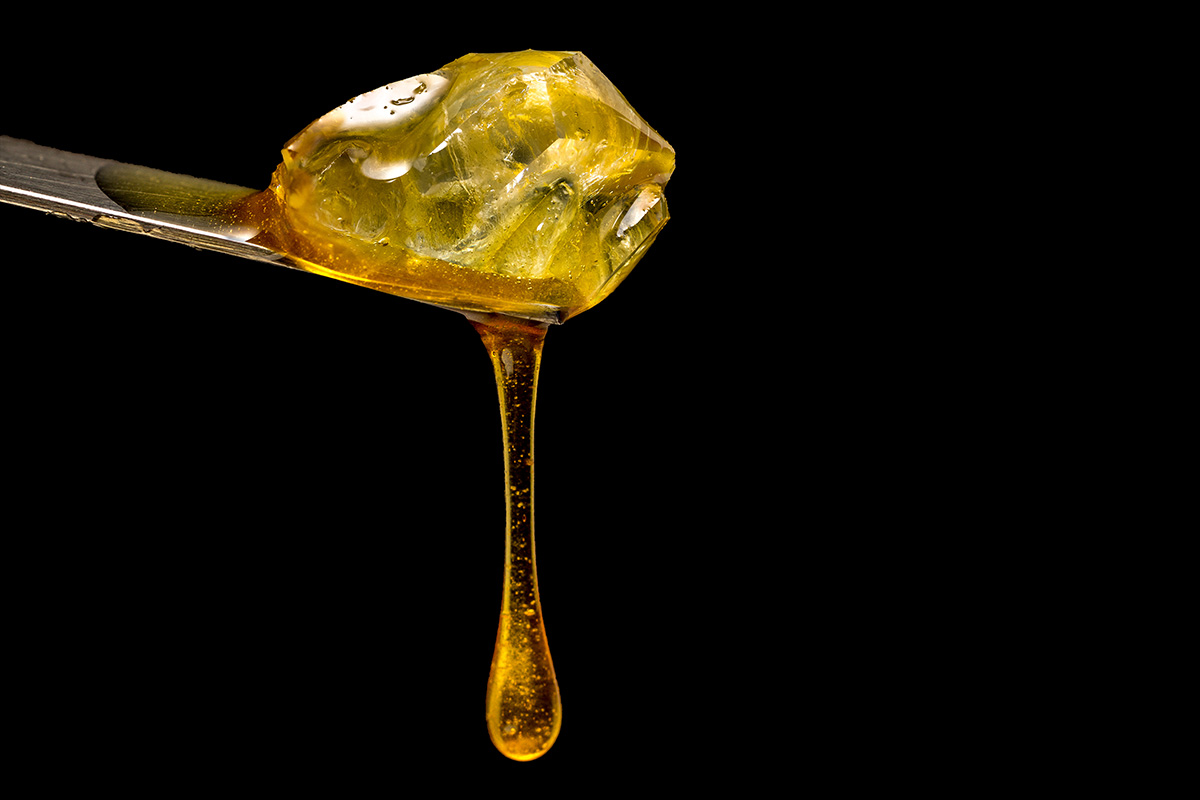 “Rocks and Sauce is a product where THCA crystals grow in their own high terpene extraction,” said Team Oleum. “They are often made from fresh frozen material but can be made from dried/cured material, too.” 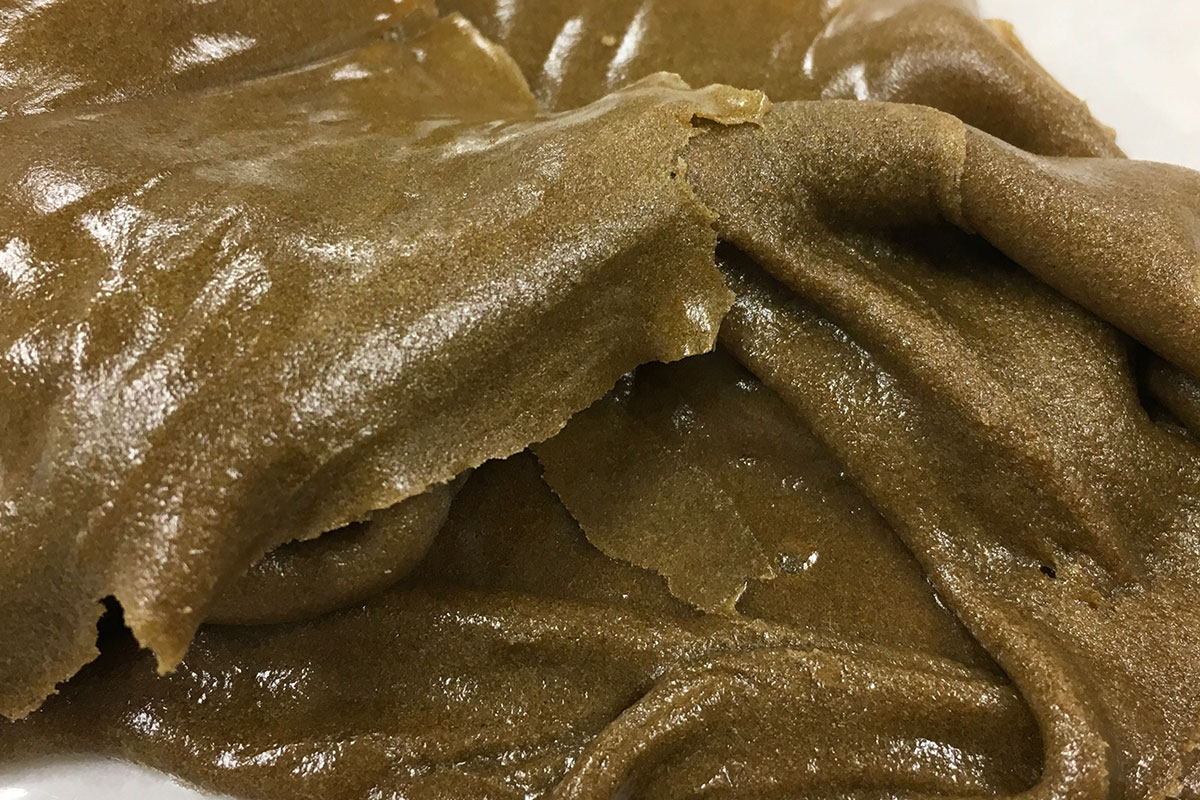 Hash is one of the oldest cannabis preparations available. It’s also one of the simplest to make. Hash is most often made by rubbing dried cannabis flower on a screen, breaking off trichomes via agitation. The broken trichomes are then collected and compressed into hash.

Bubble hash or ice water hash is another type of concentrate made using agitation. Only, this variety of hash uses ice water to freeze trichome resin glands. The cold temperature makes trichomes more brittle, which allows them to more easily break away from plant material. The end result is grainy trichome goo that is then dried and compressed into hash. 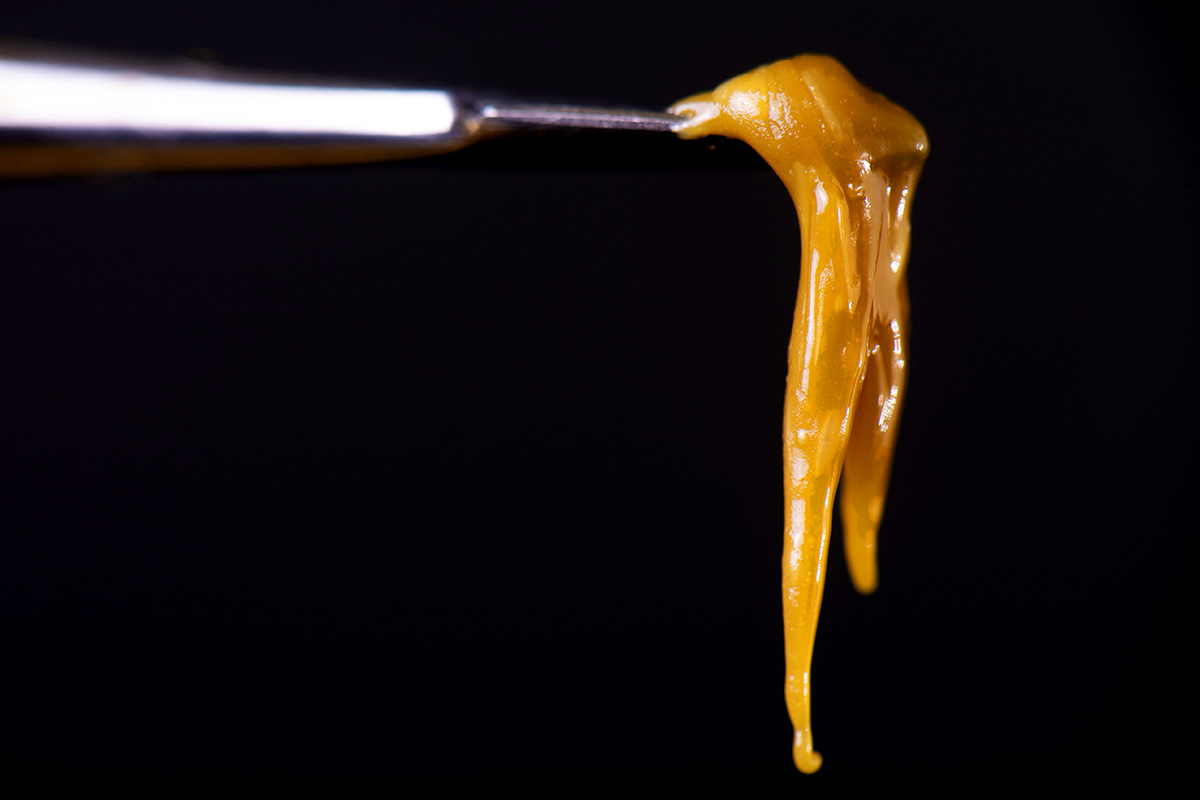 Rosin is one of the most popular concentrates available today. Like hash, rosin is relatively easy to make. This solventless preparation uses heat and pressure to melt trichomes off of plant material. These trichomes are often melted between two solid hot plates, which compresses them into an almost shatter-like consistency. Rosin tends to be slightly translucent, although it remains mailable and soft, a stark contrast to shatter’s glass-like nature.

Exciting Advances and New Developments in the World of Cannabis Concentrates 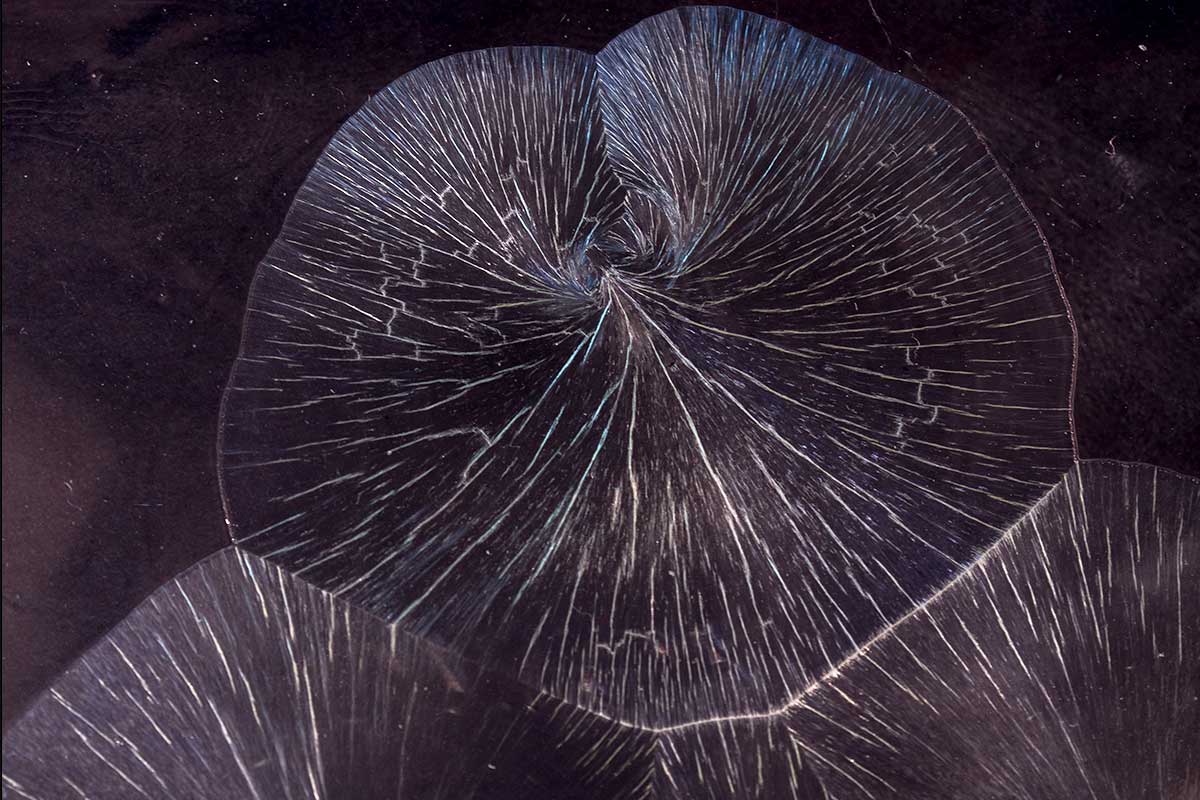 Team Oleum believe that isolates, the separation of cannabinoids and terpenes are exciting developments and new in the field of concentrates.

“We are now starting to understand isolation and separation on a much deeper level,” said Team Oleum. “This allows us to reconfigure ratios of cannabinoids to terpenes — to alter the experience, flavors and effects of these products.

“This has never been an option before with cannabis concentrates, we believe the future will incorporate a lot of these unique and novel combinations into the cannabis consumer’s diet. For instance, our IceWalker is a product that incorporates THCA Crystalline Wizard Stones, Delta-8-AquaTek Distillate and cannabis-derived terpenes. These types of concentrate concoctions were not possible a few years ago, we are excited to see what will come available in the next five years.

“In addition to isolations, we are also starting to retain terpenes (flavors) and their respective cannabinoids in such a way as to mimic the actual taste, smell and effect of the flower it comes from. It wasn’t too long ago that material was just put into a column and blasted with solvent, hoping for the best outcome in the end product and it was often hit or miss. Now, a lot more science, better cultivation, and preparation of materials, and better understanding and innovation of equipment have allowed us to employ much more efficient methods in cannabis extraction and processing. This, in turn, allows us to produce a much higher quality product much more consistently. Something that benefits both the producers and the consumers.

“Last but not least, CRC (Color Remediation Cartridge) seems to be making an introduction by offering solutions to the removal of unwanted colors and compounds in cannabis concentrates. These colors and compounds include lipids, chlorophyll, carotene, xanthophyll, pheophytins and lycopene,” said Team Oleum. “Due to the compounds being used in this process, it should only be done by those with proper equipment/lab and training. It definitely has its place in the concentrate industry as a means of cleaning up product, but in the same breath, good concentrates should always come from good starting material. As the tried and true saying goes, “Fire In.. Fire Out”.

“These methods of remediation can often take away from the true and original character of the strain and extract. We try to stay as close to the original cultivar as we can…in most cases it’s what we and the end consumer prefers.”